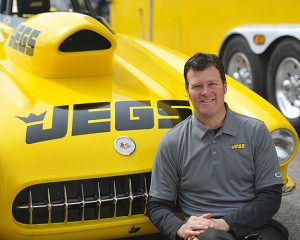 Few names in the drag racing world create as much excitement as the name Coughlin – specifically, Jeg Coughlin Jr. The 2nd generation namesake of the Jegs racing family is a four-time NHRA Pro Stock and five-time overall NHRA World Champion. And in 2012 – after taking a one-year hiatus from the Pro Stock category he’s dominated over much of the past decade – Jeg Jr. will return to the Full Throttle Pro Stock series with a new car, a new uniform and a brand new sponsor – Mopar.

A few weeks ago, Jeg came to Horizons to get his publicity photos taken. With the Mopar logo emblazoned on his familiar yellow and black Jegs firesuit, he posed in a variety of caps, helmets, and even an assortment of casual sportswear items. And of course, his trusty steed was photographed in Horizons’ Studio B – the large soundstage that can easily be adapted to accommodate vehicle photography. Thankfully, Jeg didn’t drive the Dodge Avenger Hemi with its 500 cu.ft. engine into the studio – it was carefully pushed into position before being shot by Director of Photography Tim Courlas. After the photography session was completed, news of the top secret Mopar sponsorship and of Jeg’s return to Pro Stock had to remain secret – until he made the big announcement November 1st on the main stage of the world-renowned SEMA (Specialty Equipment Market Association) show in Las Vegas.

Of course, we’re looking forward to seeing the vehicle – and its operator – screaming down NHRA tracks all over the country next year, beginning with the 2012 season-opening event February 9-12 –  the 52nd annual O’Reilly Auto Parts NHRA Winternationals at Auto Club Raceway in Pomona, California.

For more stories about the Jegs Mopar sponsorship and the announcement in Vegas, visit autoweek.comand motorsport.com. And for more complete coverage of the entire racing program, visit teamjegs.com.