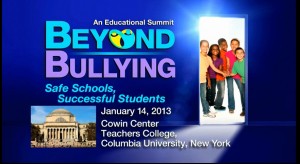 National Summit on School Bullying Attracts Attention and Expertise, While Laying the Groundwork for Decisive Action

The event attracted scholars, researchers, administrators, department of education officials, and of course teachers – from all over the United States. A keynote address was delivered by Kirk Smalley of Stand For the Silent, an organization founded after Smalley’s son committed suicide following years of relentless bullying. He and his wife have traveled around the world and spoken to more than half a million children about the need for greater compassion and understanding in our school communities.

Also attending the summit was Peter Yarrow, a member of the legendary folk group Peter, Paul and Mary. Yarrow is the founder of Operation Respect, an organization aimed at increasing awareness for nurturing students’ social-emotional learning.

While bullying in school is not new, the recent spike in school shootings, student suicides, cyber attacks perpetrated by students through social media outlets like Facebook and Twitter…and on the heels of the eye-opening documentary Bully, awareness is growing that decisive, coordinated action needs to be implemented to stem the rising tide of violence and abuse. Experts in the field generally agree that the most important step is creating a school climate in which social emotional learning is emphasized, supported and reinforced throughout the curriculum.

Horizons was proud to assist Zaner-Bloser in providing the production support for the summit itself, and for the audiovisual and web-distributed messaging dedicated to addressing this critical educational problem.